Tetsuo: The Iron Man (鉄男, Tetsuo) is a 1989 Japanese cyberpunk body horror film written, produced, edited, and directed by Shinya Tsukamoto. It is shot in the same low-budget, underground-production style as his first two films. The film established Tsukamoto internationally and created his worldwide cult following.[1] It was followed by Tetsuo II: Body Hammer (1992) and Tetsuo: The Bullet Man (2009)..

A metal fetishist (Shinya Tsukamoto) enters his Tokyo hideout, which is full of metal parts and photos of famous athletes. He cuts open his thigh and thrusts a large metal rod into the wound. Later, he unwraps the wound to discover it rotting and covered with maggots. Horrified, he runs outside into the street and gets hit by a car.

A salaryman (Tomorowo Taguchi) is tormented by visions of metal and industrial machinery. While shaving in his apartment, he notices a metal spike protruding from his cheek that spurts blood when he touches it. He speaks to his girlfriend (Kei Fujiwara) on the phone, who says she cannot stop thinking about “the incident”. 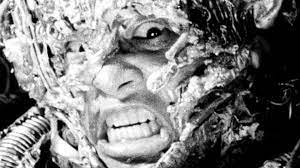 Stephen Holden of the New York Times described the film as having “hyperkinetic pacing and wildly contorted acting” as well as “a perverse sense of humor”, and concluded that “the appeal…should be limited to aficionados of weird genre films.”[14] Richard Harrington of the Washington Post wrote that the film is “as surreally weird as Eraserhead and as intense as a Novocainless tooth extraction”, and that it has “a nightmarish hyper-reality about it, feeling like a cartoon, but more disturbing for not being one.”[15] Slant Magazine’s Ed Gonzalez rated the film three and a half out of four stars, comparing the film to the works of David Cronenberg.[16] Marc Savlov of The Austin Chronicle praised the film’s cinematography, pacing, and themes; calling the film “a ferociously original 16mm nightmare”.

Prior to the release of Tetsuo: The Iron Man, Japanese films had largely been ignored by international film festivals. The film’s success attracted international attention to Japanese cinema and prompted a revival of Japanese independent film in the 1990s.

Skip back to main navigation